The SIdO (The IoT Showroom) is an event held yearly in Lyon (France), to showcase the latest trends in the IoT (Internet of Things) domain. This year, the event considerably grew in comparisons to previous years. It hosted more than 350 Exhibitors, from all over the world. Major companies from the computing domain (e.g. Microsoft, Dell, HP, IBM, etc.) were present to exhibit new ideas and concepts for the future of IoT. But the event is not only a gathering of big software companies and hardware manufacturers, but also of startups with innovative new ideas for the IoT market. Because a large area of the exhibition ground was reserved for them, to present their ideas. Also, since he entry is free, the event attracted a lot of interesting people, from other domains. Attached to the exhibition, were also workshops and a conference were speakers presented new ideas and discussed open topics in the current IoT landscape (e.g. security of IoT devices, precise indoor tracking, etc.).

VOSYS had a booth shared with VM2M and presented a demonstrator related to NGPaaS WP5 work that the company is doing in the direction of the IoT use-case (IoT PaaS). In particular, VOSYS demonstrated a IoT gateway secured and consolidated using virtualization technologies. Two devices with diferent levels of criticality, a critical heart sensor and a environment (temperature, light, motion, …) sensor, were connected to the same IoT gateway running a software partitioner component from VOSYS. The demonstration shows the isolation of the two devises using a single gateway platform. Graphs of the data were displayed in real time on screens via a web browser, the web platform from VM2M, CommonSense, was used to managed the IoT devices and to store and display the data coming form the sensors. 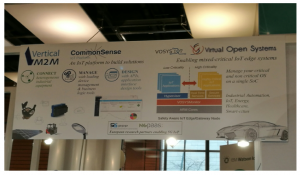 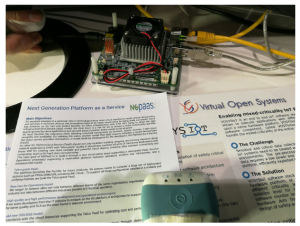 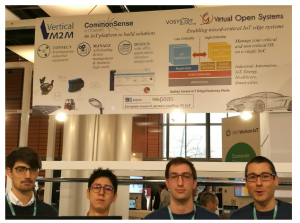